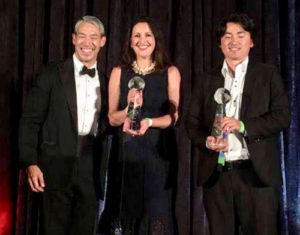 2019 Annual Awards Dinner and Gala Party
Since 1962, Sister Cities International has recognized exceptional Sister City programs. Achievements made in 2018 was celebrated with dinner and dancing. 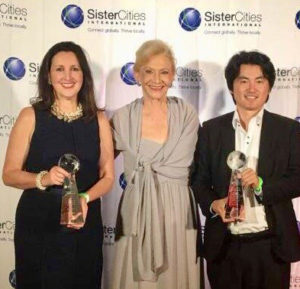 The Chairman's Awards were given by SCI Chair/Mayor of San Antonio Ron Nirenberg to Shin Koyamada, SCI Board Director and KIF Chair. Mr. Koyamada was also awarded the same one in 2018 so he won two years in a roll!

As a special guest, Sister Cities International was honored to welcome President George W. Bush  with over 700 attendees. The evening featured a fireside chat with President Bush, former Honorary Chairman of Sister Cities International, where he discussed the importance of nurturing a global perspective, promoting business relationships, and the potential for citizen diplomacy to create positive change in today’s world.

George W. Bush served as 43rd President of the United States of America from 2001-2009.  As Commander in Chief, President Bush worked to expand freedom, opportunity, and security at home and abroad. After the Presidency, President Bush and former First Lady Laura Bush founded the George W. Bush Presidential Center in Dallas, Texas. The Bush Center is home to the George W. Bush Presidential Library and Museum and the George W. Bush Institute, a nonpartisan public policy and leadership development center that engages communities across the United States and around the world by developing leaders, advancing policy, and taking action to solve today’s most pressing challenges. Prior to serving as President, he was the 46th Governor of Texas from 1995-2000.