The event "A Lecture by Professor Shuji Nakamura hosted by Rising Sun of Los Angeles and co-hosted by KIF was held for two hours at the Kyoto Grand Hotel on Sunday, November 20th, 2010. The admission was free.

Shuji Nakamura was born on May 22, 1954 in Ehime, Japan.  He obtained B.E., M.S., and Ph.D. degrees in Electrical Engineering from the University of Tokushima, Japan in 1977, 1979, and 1994, respectively.  He joined Nichia Chemical Industries Ltd in 1979. In 1988, he spent a year at the University of Florida as a visiting research associate.  In 1989, he started the research of blue LEDs using group-III nitride materials. In 1993 and 1995, he developed the first group-III nitride-based blue/green LEDs.  He also developed the first group-III nitride-based violet laser diodes (LDs) in 1995.

The development of nitride based semiconductors, by Prof. Nakamura, represents one of the most important achievements in the materials science of semiconductors in the last 30 years. Specifically, the discovery of p-type doping in Gallium Nitride (GaN) and the development of blue, green, and white light emitting diodes (LEDs) and blue laser diodes (LDs) has enabled energy efficient lighting and displays. Dr. Nakamura discovered that p-type GaN films could be obtained by doping GaN with Mg, with successive post-thermal annealing in nitrogen ambient at temperatures above 400°C.  Dr. Nakamura also developed InGaN films of the highest crystal quality which enabled the realization of bright blue double heterostructure light emitting devices. These achievements have resulted in great benefits to mankind through their use in devices for energy efficient solid-state lighting, displays, medicine, and the next generation of Blu-Ray optical storage. The general conclusion among scientists at this time is that Dr. Nakamura’s inventions are so reliable and energy efficient that they are destined to replace Thomas Edison’s light bulb and save the world billions of dollars in energy costs.

Professor Nakamura had received numerous awards for his work, including the Nishina Memorial Award (1996), the Materials Research Society Medal Award (1997), the Institute of Electrical and Electronics Engineers Jack A. Morton Award, the British Rank Prize (1998), the Benjamin Franklin Medal Award (2002), the Millennium Technology Prize (2006), the Czochralski Award (2007), the Prince of Asturias Award for Technical Scientific Research (2008), The Harvey Award (2009), and the Technology & Engineering Emmy Award (2012) awarded by The National Academy of Television Arts & Sciences (NATAS). He was elected as a member of the U.S. National Academy of Engineering in 2003.

Since 2000, he has been a professor of Materials at the University of California, Santa Barbara. He holds more than 100 patents and has published more than 400 papers in his field. Professor Nakamura is the Research Director of the Solid State Lighting & Energy Center. 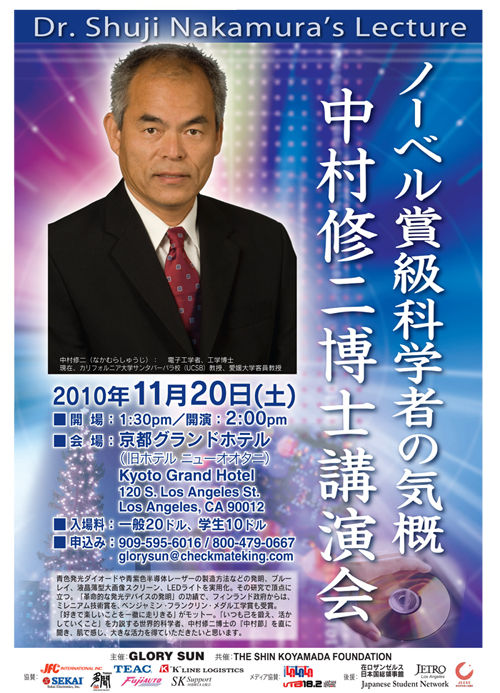